Your website – is very adhd – BUT don’t change it – I had to figure out who was who and had trouble placing your ages. Your mum must be an amazing person.

May be I have not read enough but even though the site is very “open” and you share a lot, I feel know v, little basic stuff about you guys – in terns of the “normal” stuff such as professional stuff, education, loves hates, travel experiences, etc….girlfriends???

We are passionate about life and getting the most out of it! That means that you need your physical, mental and financial health to be in balance and that is what our business is all about. We realized this after we had hit the toppish of our corporate careers – still wanting to grow AND have more time to travel so realized that we needed to do something about it. That’s when we started our business. Through it we teach others how to run their business and achieve the goals that they want to reach and through helping them we achieve our goals.

We are interested in partnering with ambitious, outgoing people who want to get more out of life – be it personal performance, sport performance, financial performance – or all of the above – just have them contact us – wherever in the world they are.

What is one thing that you think every person should do in their lifetime?

Ummm, running a marathon is NOT it – its simply not for everyone and then I might say in a couple of years time – doing an ironman so that won’t do at all.

It has to be TRAVEL – be it take a cruise, get on a plane, drive over the world – open your mind and heart to new stuff and let it stay open! You will be surprised where it leads to.

My brother picked me up at 4:30 AM Sunday morning.  Yes, you read correctly 4:30 AM.  Luckily, we were being dropped off by my brothers girlfriend, Jacklyn otherwise we would have had to arrive in Orange County at that time.  Which would have meant being picked up before 4 AM.  Typically, I don’t wake up before 9 AM.

I couldn’t sleep the night before, which is usually the case when I have something important planned and need as much sleep as possible.  For some reason I get this overwhelming sense of anxiety and can’t sleep the night’s when I need the most sleep, although, I did get 3 hours of sleep which is better than usual.

Jacklyn and her sister, Danielle, our personal athletic trainer drove us to Fashion Island in Orange County and dropped us off shortly after 5 AM on Sunday morning.  Thousands of people were making their way towards the start line of the race and we followed along side them.  We made sure to hydrate before the race and drank a couple bottles of water, and with the drinking of water came the need to urinate.  It looks like many others had the same idea of hydration because the lines for the toilets were LONG.  Fortunately, the organizers of the Orange County Marathon had the forsight to order a ton of port-o-potties so we were able to find one with a small line and did our business.

We then made our way to the start line.  The Marathon was scheduled to start in waves and according to our paper work, we were placed in wave two.  When we looked at the signs strewn around the marathoners; however, we soon realized that there was no wave 2.  The actual waves were broken down into letter, A, B can C as far as we could tell so we jumped in with the B’s.

Our bib numbers were pretty sweet as everyone who was running the race and spectators alike commented on our good fortune.  Mine was 2222 and my brothers was 2221.  Also, when we signed up for the race we were allowed to sign up as a team, so, my brother signed us up as The Running Brothers which was largely displayed on our bib numbers.

I was very active Twittering in the days just before the race and one person actually recognized us from our tweets, which was very cool.  He introduced himself as Cory and asked which one of us was training for the Ironman.  Unfortunately, I forgot to ask what his Twitter name was so we could be sure that we connected with him after the race, so Cory, if you’re reading this . . . let us know.

One last thing I need to mention was that my poor brother came down ill in the days preceding our marathon and was not looking good on the day we ran the marath0n.  It was awful timing to be sick on that day and I totally would have understood if he didn’t want to even attempt the race, because in all honesty, he looked terrible.  But, being the trooper my brother is, he attempted to run the race anyways.  Not only that, but he never made any excuses and secretly I think he even was trying not to let me know that he was sick.  Running a marathon is hard enough, but doing it while sick and running in 80+ degree temperatures . . . now that’s what I call guts.

The first wave went off around 6 O’Clock and the second wave began around 15 minutes later.  Just before we were about to begin my brother turned to me and said, “I’m not sure this is such a good idea.” 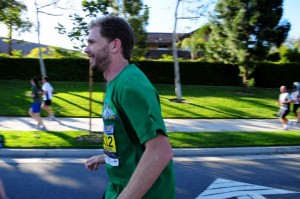