At the transition zone, I jumped off my bike and my legs, still used to moving from the pedals got me started on my run.  I have never immediately started running after getting off the bike, but it was an interesting feeling.  My legs seemed to move as if I was still pedalling.  I was definitely running faster than my legs wanted to, but they were used to that motion and continued to move quickly despite me trying to slow them down.

I got tired quickly on the run and despite my goal always being to run the whole way, I had to walk.  Briefly, I walked in order to catch my breath which was heavy from the swim, the bike, and the breakfast burrito I had eaten earlier that morning.  I caught my breath fairly quickly and was able to do sporadic bursts of runs in between my walks.

The run was hillier than the bike ride was.  Steep elevation changes occurred throughout the run, making it difficult to catch my breath and run the entire course.  I ran through the train station and onto the road which would lead me to the hospital my brother was staying at.

I wanted to run by the hospital and pound on his window, letting him know that I had ran right past him, but it was out of the way and I couldn’t be certain that I would be pounding on the wrong window and disturbing someone who might be seriously ill.  As I ran past the hospital, my Mom was outside cheering me on.

I pushed forward up the enourmous hill and once I reached the top, I knew I was at the home stretch.  The rest of the race was downhill and I was able to fly.  I let my legs take over and I ran as fast as I could down the final straightaway when I heard my name through the speakers, announcing everyone of my presence.

My Dad and sister were there waiting for me at the finish line.  The race was complete.  But somehow it felt incomplete.  The other Running Brother was not there.  It has always been a great feeling for me to cheer my brother on after I have beaten him and I was looking forward to doing it again.  But, he was in the hospital.

After the race, we quickly gathered our things and went to visit our brother at the hospital.  I was eager to tell him everything I had done and everything he had missed out on.

Before I could get into the pool, I had to wait for another competitor to finish his swim.  His wife was his counter, meaning she was counting the amount of laps he had completed.  The second he finished his 18th lap, he sprung out of the pool, ripped off his goggles, threw them at his wife, and ran to the transition area.

With that, I lowered myself into the pool and put my goggles on.  I was ready.

One of my concerns coming into this race was knowing what to wear.  I looked around and saw a bunch of people in ridiculous looking triathlon gear.  Which was much smarter than what I had decided to wear.  I was wearing soccer shorts into the pool and that’s what I planned on wearing the entire race.

I quickly realized this was probably not the best idea.

As I pushed off the ledge of the pool to start my first lap, my soccer shorts were pulled down from my pelvic area.  I was sure I was mooning everyone who had come to watch the swimmers swim.  Nothing like showing some ass crack to a group of strangers.  But, I continued on anways.

Every few laps or so I found myself, pulling up my shorts, but other than that, everything was going smoothly.  I was keeping a strong steady pace and in comparison to the other competitor in my lane I was flying.  I was completing two laps for every one that she was completing.

The swim felt good and, as my counter, my Dad was yelling out the lap numbers as I completed them, always telling me to pace myself.  I must have been hauling then, considering he was contuinually telling me to slow down, but I felt good.

I heard my Dad yell “18” as I reached the edge of the pool.  For the last lap, I gave it all I had and pushed for my last lap in the pool.  I had plenty of energy and completed my swim powerfully.  I hoisted myself out of the pool threw off my goggles and ran to the transition zone, ready to hop on my bike.

The San Luis Obispo Triathlon started in the SLO Swim Center, oddly enough, this was the same pool where I had learned to swim probably 25 years ago when my mother signed me up for lessons there.

They were able to fit somewhere between 30 to 40 people in the pool at the same time and we swam the width of the pool, which was 25 meters long.

As I walked to the starting station, my Dad gave me some last minute advice.  “Be sure to pace y0urself,” he said.  Apparently, we were allowed to do some warm up laps.  I didn’t need them.  I was ready.

I am most passionate about running as well as truthfully living in the moment, although it may sound cliché it is something I work for each and everyday.

What is one thing that you think everyone should do in life?

I think everyone should pick one thing in their life they think they could never accomplish and find the necessary tools to reach that goal no matter what it may be.

What is the best advice you can give when it comes to running?

I would say consistency is key; running is not a seasonal thing it is a lifetime commitment, one that is affected by all aspects of your life.

How long have you worked at A Snail’s Pace?

I have worked here for 2 years and 9 months.

When we came to try on shoes at A Snail’s Pace, you had us get on a device that analyzed our feet.  Can you tell us more about that?

First we place them on a foot pressure analysis device to measure their foot length, arch type, and even metatarsal pressure. After that we bring out a neutral test shoe that is one-half or even one size bigger than the machine said to allow room for swelling and downhill running. Once they have the neutral shoe on we watch them run down the center of the store and we look at the amount of over pronation of each foot stride, meaning where the person is pushing off of their foot. This helps us decide what three or four shoes will be best for the individual whether a neutral shoe is best or even stability or motion control.

What are your greatest memories involving working at A Snail’s Pace?

There are many but two great stories come to mind…

The first is about a guy who came into the store about a year ago and he had told me he was not training for anything he just wanted to lose some weight, so I fit him for the shoes I thought were best and about a week ago he came back in and I did not even recognize him, he had lost so much weight. And being the outgoing person I am I asked him if he had shopped with us before and his wife told me that I was the one to fit him for his first pair of running shoes and he also thanked me for helping him lose 125 pounds, he said I “helped changed his life.”

The second was when The Running Brothers came in and brightened my day with their goofy jokes and love for exercising and running together.

What did you think of The Running Brothers when you met them?

When I first met the Running Brothers I had asked them if they had ever been told that they looked like the Step Brothers. As promised I watched their video right after work and proceeded to show my friends it was very entertaining, I believe I watched the first one. My favorite part was the graphics included throughout the clip.

What race would you encourage others to participate in?

Do you work for anyone else besides A Snail’s Pace?

Do you support any charities?

Make A Wish Foundation-charity very close to my heart

Has anyone helped you out with your running career?

Nick Longo: Strength and Conditioning Coach.  My coach John Elders.  And probably most often from my dad Ed Lowrie.

What else do you love?

I love working with children, I love how they are so carefree about life and they always brighten my day!

Any websites or magazines that you would like to tell others about?

Well of course (anything) from A Snail’s Pace, also I read Runner’s World magazine.

How long have you been running?

I am an avid runner and have been since I was 11 years old, however I have also have been a running coach since I was 15 so I am able to see both aspects.

How has running impacted your life?

While currently I work at a running store, this has enabled me to look at the technology of running, and now I can truly be called a well-rounded runner. Running has caused me multiple injuries, such as stress fractures, however it has made me a stronger person and athlete. It has even led me to my desired occupation of physical therapy, with the countless hours spent in the physical therapist’s office I was able to realize what a life changing occupation this can be.

Do you have any experience biking and swimming?

As for biking and swimming I would participate in these activities when I was injured, so they have helped me along my journey as well.

My greatest memory of running would have to be my freshman year in high school when my high school team took 5th in State for Cross Country.

What types of events do you run in?

The events I have competed in have all been longer distances in track, in high school it was the 1600 and 3200, in college it has been the 5000; along with competing in local 5k’s to keep in shape in the off-season. My favorite one however would have to be the Claremont 4th of July 5k.

Do you have any advice for us when it comes to running?

Keep up the hard work and never give up, training is key as well, start early, set a goal and go for it. 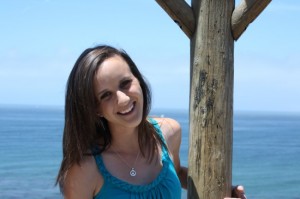 Tell us about yourself?

My name is Katie Lowrie and I attend Cal State Fullerton while majoring in Kinesiology. I also run Cross Country and Track for the School and work for A Snail’s Pace Running Shop in Brea. I enjoy running on the beach and on trails around the city so I am able to enjoy my surroundings while exercising. I also enjoy babysitting and photography and on day hope to become a pediatric physical therapist. My family is also very important to me, I have one younger brother Michael and a younger sister Emily who are also competitive runners, we definitely make running a family affair. Michael is 13 years old and can run laps around me, he keeps me motivated to keep on improving, while my sister Emily finds great joy in running and she inspires me to enjoy what I do and make sure that I am doing it for the right reasons.