I’ve been asked by the Running Brothers to submit an article regarding running and the ensuing leg problems (specifically the knee) that occur from time to time when training for marathons or any distances for that matter. First please note I am not a physician and have no medical training whatsoever. So my advice and ideas come from books and articles I have read over my 50 years of running, tips I have heard (and tried) from fellow runners but mostly from the experiences I have had and learned from when training for road races from the 5k to the marathon.

If you care to know for credibility sake, my exploits as a runner began when I was 14 years old when being pretty marginal at other sports, I found just going out and running I had some talent. In high school I ran X-country and in track the half mile, with a 1:59.6 best as a high school senior. In college I was a letterman at the U. of Michigan running X-country and track with a best of 1:51.2 for the half mile and when at home in So Cal trained several summers at the Santa Monica track club under the watchful eye of the famous Hungarian distance coach, Mihaly Igloi, who defected with the Hungarian Olympic team in the 1956 Olympics.

After graduation I entered the Air Force as a fighter pilot, but still kept running on the side as a way to stay in shape. Interestingly when I moved into the new F-15 Eagle, these latest highly advanced fighters could pull high “G” loads over sustained periods of time. As pilots new to this increased physical and high stress environment, scientists and doctors came to find out that running was not good for sustaining and holding high “G” forces. This was in essence because running lowers blood pressure and thus would cause early grey outs or even black outs of the lean runner pilot as opposed to those pilots with more weight, bulkier muscle mass or with higher blood pressure. In fact in the 70’s flight surgeons intimated smoking was good for flying these new fighters because it increased blood pressure and gave those pilots increased tolerance to the high “G” forces they would encounter when maneuvering their jets. So needless to say, running took a back seat in my life for several years as I could not afford to “blackout” in the dogfight environment and subsequently lose to the pilot opponent I was flying against.

When I left the USAF in 1981 to head for the airlines my interest in competitive running resurfaced and of course marathoning was now at its peak. So of course I had to try one and it was then the old competitive running juices really began to flow. In the following 8-9 years I became addicted to road racing, joined a large running club in NJ, trained heavily for many marathons and shorter distances and thoroughly enjoyed the thrill of running at as high a maximum for your body and skill level as you could muster. I ran many 10ks in the 33:00+ range, some half marathons just under 1+13:00 and with 14 marathons under my belt, ran 7 under 2+40:00 with a best at Philly in 2+38:39 and Boston in 2+39:06. No matter how hard I tried I never could break the 2+30 hour marathon goal, but enjoyed the journey of trying along the way nonetheless. 2

So with my credentials noted above as far as injuries go here’s some general advice to my fellow runners, most much younger in age than me now but the affects of running high mileage are pretty much the same even today. 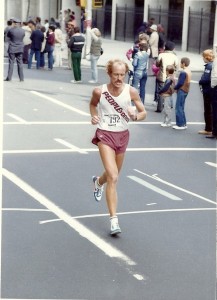 Uncle Steve Jaros at the Boston Marathon in 1981

1. In general most any ache or pain or injury below the hip is often shoe related. So insure you have the correctly fitted shoes for your, build, stride, foot plant, etc. If you are running more than 30 miles per week, I’d also suggest you invest in a second pair of training shoes. More than 60 miles per week better to have even a third pair. Alternate among these shoes so your foot and legs do not get too accustomed to the wearing down of just one pair.

2. If you are new to running and especially distances longer than 5 miles at a stretch your advancement to longer distances or faster times must be methodical and deliberate and well planned out. I often paid the price for over training by running some great workouts, raced partly burned out and then suffered an injury because I did too much, too soon, too fast. Thus it is easy to get over enthusiastic.

3. A typical and reasonable time period to train for half marathons and above should really be at a minimum of 6 months before the event. Even better would be 9 months to a year. This allows you and your body time to gain strength, endurance and of course the most important ingredient, rest before the big event.

4. If you are training hard and do acquire an injury, such as a knee soreness or tenderness, it is most likely because of #2. But also check the following.

5. Lastly becoming an avid full time runner not only gets your body honed and working on all cylinders, but you will become very aware throughout the rest of your life of any little thing that may be happening, good or bad, to your body. This is another of the many positive side benefits of being a Long Distance Runner.

So thanks for the opportunity to contribute and good luck to the Running Bros. in all their running endeavors. Any questions, just throw them on the blog or email me at sjaros@verizon.net and I’ll eventually get back to you.

Hello, I am Lacey Welborn of LaceyW.com and sister to the Running Brothers. I am very proud of my brothers for getting all this going. They’ve set ambitious goals for themselves. They told people they knew about their goals and found they have similar goals. They made the decision to help each other stay on track. Then, they started this blog which, will not only track their progress, but also keep them accountable to work towards the goals they have set. Rocky wants to be a marathoner. Zeb wants to become an Iron Man.

Rocky, my twin, used to run cross country in high school. I think he has a very good understanding of the work that he will have do to get into marathon running shape. He knows it will be difficult, but he also knows just what he needs to do to reach the finish line.

Zeb, on the other hand, has no idea what he’s in for. Sure, he’s always played sports and for a while he was a gym rat, but he hasn’t done much in endurance training. Besides the sprint triathlon he ran last year he’s got nothing under his belt. When he told me he wanted to be an Iron Man I thought once he looked into it he’d leave that idea behind and settle on something else. Needless to say I was wrong.

A couple days ago Zeb told about his swim workout. He wanted to see how long he could swim without stopping. When he told me his results I was surprised. He did really well. Zeb says he knows that he can finish the swimming part of the Iron Man in the appropriate amount of time. Perfectly reasonable, BUT then he told me that he thinks completing this Iron Man is going to be a lot easier than he originally thought.

Wait. What!? Easier? It’s insane! Complete a marathon after biking 112 miles and swimming 2.5 miles… to me, it’s CRAZY!

I’m glad he thinks it won’t be too hard. I have to admire his optimism. I will definitely encourage him, but I know there will be road blocks, and I hope he’ll be ready for them.