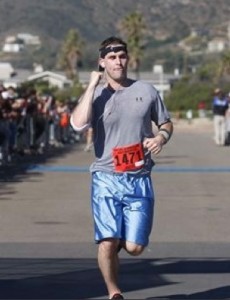 I “met” the running brothers through the OC Marathon, specifically, through twitter as we were all entered in that event. While the brothers took on the massive challenge that is a full marathon, I took on the shorter half marathon, which I have really come to love. Unfortunately, I didn’t get the chance to meet Zeb and Rocky, but through twitter we were able to stay in touch and they were kind enough to offer me the opportunity to write a blog entry for their website.

My name is Greg Hamilton and aside from being an MBA and marketing manager, I’m an avid sports fan, and am passionate about fitness and exercise. I was never really passionate about running at all until recently. In September of 2010 I had just started my new job after finishing my graduate program. One of the big reasons I came out to get my MBA in the first place is I wasn’t satisfied with my old job. It wasn’t the company, or the people, but my actual output at the end of every day. What I really wanted was something that I could own, something that I could create from beginning to end, with all the success and failures in between, and then be able to look back and say to myself, “I did that. I accomplished that.” That’s why I always loved sports. In Football you start as a team, you work toward a goal, and whether or not you can get there, I guarantee that if you put the work in you will be a better, stronger person. As much as I wanted that feeling in through my professional career, I realized that I could never duplicate what an athletic accomplishment feels like.

Funny enough, the turning point for me came from Peter King, Sports Illustrated’s football writer and one of the best sportswriters of our time. Peter made a wrong football prediction and in turn he decided to run a half marathon, which he did. When I read his final piece abut finishing I thought to myself, I need to get up off my ass and do something like that. Maybe it would bring back the feeling of sports accomplishment into my life. Setting a goal, working toward it, and knowing you gave it your all.

My first race was on November 15th, and since then I’ve become a runner. I love it. It’s not the running that I’m passionate about. It’s so much more than that. It’s knowing how you did the first time, and knowing that you absolutely can do better. It’s about being accountable only to yourself and being a better person for it. It’s about the community of like minded people who feel the same way, who encourage you, who run by your side, and whether they know it or not, make you better. I love knowing that I hit my first wall, came back again, and beat my time. Then I trained even harder and beat it again. I loved being passed by someone much, much older than me and then feeling humbled by it, but then smiling and thinking that someday, I want to be that guy, still doing it, and leaving all the young kids in his dust. And I love getting the medals. Just like in my goal to change my career, I can look at them and say. “I did that. I accomplished that.”

I still haven’t tackled a marathon yet. I’ve done a bunch of half’s, a trail run, and some obstacle races. Someday I’ll get there, but I still tell myself I’m new at this. That’s why I respect what Zeb and Rocky did, and they should be very proud of it. I also know that they feel the same way that I do. They know they can absolutely do better, and next time they will, and the next time after that. One of these days, I’ll be there with them.