Many people had given me tips on how to run a marathon.  Many of our heroes provided comments on www.runningbrothers.com and others did so on Facebook.  My Dad even had a few pointers to share with us after talking to some of his running friends, including our fourth hero, Greg Hardesty.  In response, I developed a game plan as to how I was going to conquer the Orange County Marathon.

I ran slowly with my brother at the start of the race, talking to him along the way and after a few minutes of blabbering on to him, I could tell that he was struggling already, most likely because he was sick.  A couple of times he did mention that he wasn’t feeling well and we were only on mile 1.  I stopped talking, thinking that he was exerting energy just listening to me and just set my own pace.  He kept with me for about 2 miles until we made it to the first water station.

For the most part, the Orange County Marathon was well planned, but I did have two complaints and the first complaint was at the first water station.  At the first water station they only had two tables with a handful of staff pouring water for the runners.  At the beginning of the race, thousands of runners are coming through that point and most were stopping for water, it took several minutes until we made our way to the front of the line to get water.

From there, I began to pull away from my brother.  The second watering station was a little more organized although not much more and upon leaving I saw my brother coming down to the hill.  I waved to him as I finished drinking my water and continued on my run.  That was the last time I would see my brother until the end of the race.

Before the race I did all kinds of stretching, especially on my knee, but for whatever reason it took a long time for me to get warmed up on my run.  My calf muscles and the muscles that went up and down my shin were extremely tight.  I actually don’t think I warmed up until about the 5th or 6th mile, but once I reached that point, it was smooth sailing . . . at least for a while.

The race weaved in and out of residential communties and briefly along the beach which was pretty cool.  We had many supporters who came out to cheer us on.  At around the 5 mile mark (I’m guessing), my brother’s girlfriend, Jacklyn and her sister, Danielle cheered me on and took pictures . . . it sure was nice to see some friendly faces.  At the 9-mile mark, Jacklyn, Danielle, my Mom, my Dad, and my sister, Lacey were there to show their support and take some high quality photos. 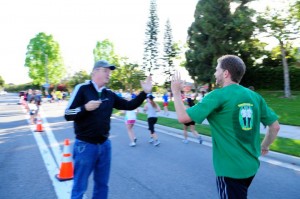 At the 11th mile is where the half-marathoners split off from the full-marathoners.  I did not realize how many more people were doing the half-marathon than the full.  When I crossed that threshold, it seemed like much more than half of the people made the turn to complete their half-marathon.  The halfway point was marked with a large blow-up gateway type thing along with some inspirational music.  I was half-way done with my marathon and with one step into the second half of the marathon had run farther than I had ever run before.