My brother and I will be participating in our first marathon in 30 days.  I’m not quite sure how my brother is preparing for the event, but I know that I am going to be devoting a large amount of time to running over the next 30 days.  I want to make sure that I can complete the full marathon running the entire way.

When we ran the Rose Bowl Half Marathon in February, I completed the entire run, but knew that I would not have lasted any longer.  I actually thought about stopping at around the 11 mile mark, but was able to push through it to continue running.  I knew I only had 2 more miles to go to complete the half marathon.  But, I think mentally I would have stopped knowing that I would have had to run another 15 miles before I could stop.

I’m excited but nervous about our upcoming marathon.  I know that I will not be as prepared as I would like to be, but I am going to try my best to get in the best shape I can by then.  I am officically starting my marathon training today and would love some company.  If anyone is interested in running daily with me I would be more than happy to have you along. 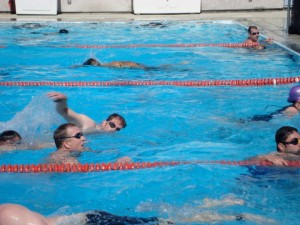 Its Spring time again and the Running Brothers are participating in a fantasy baseball draft. The Peoples Baseball League has be going on for years and is the best fantasy league arround. This is the Running Brothers 10th year with a team in the draft. If you want to check out our team follow the link:

We have the best team for sure!

Zeb, Rocky and Lacey were on location filming The Running Brothers movie today.  They got a lot accomplished in a short amount of time and should complete filming by the end of the day tomorrow.  Then the film will get put into post-production and with the amount of special effects and bonus footage, it could be quite some time before our movie gets released.

I know you all are very excited to see the final product, but you will just have to keep your pants on.  And I have a feeling that all of you out there will realize that it will be well worth the wait.

Thanks Steve for the new addition to the script.  I sent Lacey several portions of the script earlier so it was tough for me to decide what to use and what to throw away, but I’m sure when we get together we’ll be able to hash out some better plans.  For those of you that want to contribute, there is still time.  Add a line or two of dialogue and we’ll try our best to throw it in there.

Rocky and Zeb are eating breakfast . . . and either reading a newspaper or searching for news on the Internet when they come across a news article about the Race of the Century.

Zeb:  What are you eating, Rocky?

Rocky:  Whipped cream, with what looks like chocolate chips in it.

Camera shows the article about The Race of the Century.

Rocky:  Brother, with you by my side, there is nothing we can’t accomplish.

Zeb and Rocky high five each other

Rocky and Zeb are outside doing stretches and training when Johnny and Boris arrive.

Johnny:  I bet you guys think you’re going to enter the Race of the Century?  Huh?

Boris:  Well, unfortunately for you guys we’ll be doing that race too . . . And I don’t mean to brag, but I’ve knocked more people out of races than Mike Tyson’s knocked out over his career.

Johnny and Boris hand explode each other

Johnny:  You guys have about as good a chance of winning this race as Charlie Sheen has of staying sober.

Johnny and Boris hand explode each other again.

Johnny and Boris:  We’re the best and there ain’t nothin better than two hardcore racers and we’re bringin home the cheddar.

Zeb:  Man, there’s no way we’ll be able to beat those guys.

Rocky:  They were pretty intimidating, I mean they had special handshakes, matching outfits and their own rap song . . . Maybe we should just drop out?  I mean, it was a stupid idea anyways.

Zeb:  Rocky . . . Do you remember what you said to me when we began this whole thing together?

Zeb:  No, brother, you said that as long as I was by your side that their wasn’t anything we couldn’t accomplish . . . together.

Rocky:  And we’ll be doing a lot of running in this race.

Training sequence preferably around some kind of childrens play ground . . . where we fail at everything, but we’re always there to push the other one along . . . eventually we do well at everything and have a Rocky moment somewhere.

Rocky comes to Zeb the night before the race inside their home . . .

Rocky:  I don’t know if our training will be enough . . . You know how Johnny and Boris wore the same clothes and even had that intimidating catch phrase?  And their super cool handshakes?  Well, I figured we could use some intimidation of our own.

Rocky:  Are you serious?

Rocky:  Those guys are going to wet their pants tomorrow when they see us.

Johnny:  Oh look, how cute, they have matching outfits.

Boris:  Yeah, did you guys call each other before you were going out to see what to wear?

Johnny:  I wouldn’t be surprised if you fainted faster than a 14 year old girl at a Justin Bieber concert.

Rocky:  Yeah, and we’ll see who’s the best, when we dominate you like dominos dominates pizza.

Rocky:  The race is about to begin

Zeb:  We’ll just see you at the finish line.  Or maybe you won’t because you’re going down like the Titanic went down on April 10, 1912.

Zeb and Rocky:  We’re the running brothers and it’s so much fun . . . it makes our races lots of fun.  Running brother, you’re the one for me.”

The race begins and the good Rocky and Zeb win the race . . .

Rocky and Zeb are standing next to each other with medals

Rocky:  It’s like we said . . . When the Running Brothers are side by side, there’s nothing we can’t accomplish. We are making a short movie this weekend and would like contributions from YOU . . . our heroes!

Our script is about two brothers who are competing in a race.  They then run into their arch rivals and realize that they will be competing together at the race.  We have written a rudimentary script but are looking for people to add, alter or change our script in any way necessary.

If we use anything from your script or your comments, we will add you in the credits to our movie and will devote a blog post to any activity, charity, website, or group that you deem important.

We want The Running Brothers movie to be cheezy and fun, but we’re really open to any suggestions.  Every night at midnight I will put out a new script based off of the recommendations from you . . . our heroes and incorporate them into the previous days script.  This should be a lot of fun and I hope that you decide to get involved.  Even if you’ve never done anything like this before feel free to participate.

Nothing in our script is set in stone.  Feel free to alter, delete or add anything that you think would make the script more entertaining.

The Running Brothers Movie is set to be filmed this Saturday, and will probably be less than 5 minutes long.  Feel free to make changes and alterations daily to our script as from now until Saturday, our script will go up at midnight each day.  Any changes big or small will be greatly appreciated.

Recently my body has been really sore, I have not been running super hard or working out beyond my limits. I really can’t say why I am sore but it really affects how much I am able to train.

Usually I am the guy that just pushes through being uncomfortable, I rarely every take a pain killer but I think my body is telling me something. So I have decided I am gonna go get a massage and see if that gets me on the right track. I tried to do some research and found out that there are tons of different massage types. I am having a difficult time determining what kind of massage is best for a runner. I do know that I need to go to licensed massage therapist but out side of that I really don’t know what to ask for.

There is a massage called a sports massage but the reviews for these are pretty scattered. Can anyone provide me any feedback or what I should look for?