My training regimen called for 3 miles on Tuesday, 5 miles on Wednesday, 3 miles on Thursday and 6 miles on Saturday and I ran 3 miles on Monday and that was all the running I did for the week.

I’m not going to bore you with all the excuses I could come up with, but my two businesses are keeping me very busy and I’m finding it difficult to find time to fit my running in.  I know I need to make running somehting that I can’t slide on, but I do have many other priorities and things I’m trying to accomplish and running gets put on the side-burner . . . Hopefully my Running Brother can help keep me motivated.

Music and Ipods have become a huge part of training these days and my brother and I have always tried to find the perfect music or podcasts to listen to on our runs.  We post this question to our Twitter followers every once in a while in order to see what other people listen to.

@TheRoad2WD responded with a blog post that he had written for his website, http://road2warriordash.wordpress.com/.  His blog post on his Ipod selection can be found here, http://road2warriordash.wordpress.com/2011/03/31/the-road-beyond-warrior-dash-its-not-my-fault-you-hate-your-boyfriend/.  It’s quite the collection of music and I would love to generate a comprehensive list of some of the best podcasts and music to listen to while training.  Feel free to add music to our list by commenting on our website.

Like Zeb said we had to get up super early to get there in time for the 6:00 start. I like to get to these things early so I can hit the restrooms before the crowds and try to relax a bit. So I was up at 3:30 packing a small bag of pre-race supplies (waters, fig newtons, sun screen, bandaids and mole skin). I mole skinned my feet in all the places I usually get blisters and it paid off. After packing my bag and joing our personal driver (Jaclyn) it was off to pick up our athletic trainer (Danielle). They were the best support crew.

Driving to the race was a fun experience. We were anquious and excited, I think this is when Zeb realized I had a pretty good cold working, I was determined to at least start the race with him and then when he was out of sight I would slow down and see how long I could last.

We got to the start line and meet some really cool people. We headed to the restroom facilities which were crowed andthen to the start line  trying to find people that looked like runners and stand next to them for the start. 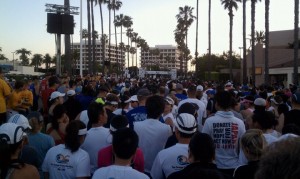 This was our first race with a waved start and it was a little different. The really good runners started at 6:00 on the dot and crowd started to do the bunch up thing and push toward the start line. Several minutes later they announced it was about our time. Zeb and I high fived and wished each other luck. I was a nice feeling that we were doing this together. I knew Zeb was gonna do great I just hoped I wouldn’t have to call our support crew for a ride somewhere on the course.

By now you have read a lot about the Orange County Marathon from my brothers. I thought I would describe some of my experiences that were slightly different than my brothers. We registered for the race several months ago but it really didn’t feel like we were going to run a marathon until about a 2 weeks before the race.

Our training really fell off in the month leading to the marathon (we called it peaking). So with two weeks to go I felt everything really had to go perfectly for us to have a chance of finishing.  With 12 days to go I decided I should try to get miles on my new Sacony’s to make sure my feet fit them. A lot of people say getting new shoes before a big race is a mistake but I really felt like it helped us out. My old running shoes felt flat and unresponsive and I really felt a difference in the new shoes.

The weekend before the race I started a yard irrigation project (digging trenches, installing irrigation pipe and that kind of stuff). I finished the project but the next day i could bearly move my back, I pulled something in my shoulder. My body can usually recover from anything in about 3 to 4 days so I wasn’t too worried that it would affect the marathon but it did disturb my sleep.

So about 3 days later my back started to feel better just like I knew it would but I had another problem. I started to feel my throat getting sore and my nose started to run. I caught some sort of cold and I only had 3 days to tell the marathon. We already made our mind up that we were gonna do this marathon and we paid the entry fee. Backing out did cross my mind because I was feeling pretty crappy because I didn’t want ruin the day for my brother. We were in this together and I was gonna atleast start the race with him.

I was still feeling pretty bad the Friday and Zeb was on a little get-away and we needed to pick up our race packets. Other than crossing the finish line I think those pre-race exhibits are the funniest part of the whole race experience, everyone is excited, friendly and helpful, you also get all kinds of cool freebies.

I picked up race numbers which had our team name (runningbros)… pretty sweet!!! After picking up the race packets and mooseing arround the exhibit hall I decided I was near Newport Harbor and I might put my resently obtained sailing certification to the test. I drove down to Newport Beach Boat Rentals where they had a nice 14`Capri sailboat. Sailing in Newport Harbor was a little complicated because it was pretty narrow but checking out those water front houses was pretty cool. It was nice and relaxing, although I still had that pesky cold thing. 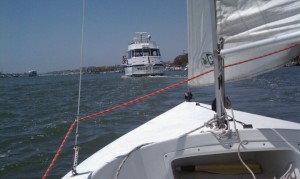