He competed in the 135-mile Coastal Challenge, “a six-day stage race on incredibly brutal and gorgeous terrain in Costa Rica . . . (he) explored a lot of rain forests and other terrain . . . running as long as 35 miles in a day to as short as 18 miles on another day.”  Who is this crazy person who would agree to participate in such an exhausting event?  Can you believe that he completed the entire 135-mile race by running?  This man is our fourth hero and a co-worker of my father’s at The Orange County Register . . . Greg Hardesty.  Greg is an ultramarathon runner. He has participated in over 24 ultramarathons and agreed to share his wisdom with The Running Brothers and our heroes. 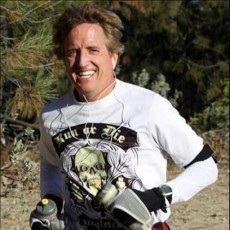 Ever heard of an ultramarathon?  I didn’t until today.  Ultramarathons are basically running events that are longer than the traditional 26.2 mile marathon events.  Greg says that he is the “worst trainer in the world,” because he doesn’t diet or stretch, and runs relatively low mileages . . . he tries to run between 40 and 50 miles a week.  (If 40 to 50 miles is considered the worst training in the world, then I know I’m in trouble).  He also says he runs on hilly terrain which he believes is the best way to train. He also works out at the gym and performs “serious” workouts on the StairMaster. He says that recently he completed a half marathon on one (impressive).

He is passionate about his career. He loves honoring people through his writing, who die before their time.  Writing has encouraged him to seek understanding for what truly makes a person happy.  He says that “too many people get caught up in planning and acquiring material goods,” but miss what is important in life, “enjoying it.”  He’s a man who lives with passion, which is also a reason why he says he is “poor.”

Greg lived in Japan for six years and recommends that every person should have the experience of living abroad for at least a year.  He said that at times he felt uncomfortable, but that he really got a sense of happiness when he constantly placed himself in uncomfortable situations, because it forced him to “live in the moment” and “be truly alive.”

Competing in the 135-mile Coastal Challenge along some of the most beautiful Costa Rican terrain he has seen and competing in 24 ultramarathons are just some of highlights of Greg Hardesty’s eventful and exciting life.  He certainly deserves to become one of our heroes as his passion is undeniable and his willingness to push himself is second to none.  Some may call him crazy for running 40 to 50 miles a week and competing in running events with distances of over 100 miles, but we call him our hero.

Greg Hardesty is a reporter for The Orange County Register and the father of two children.  He is a member of a great group of runners of all levels, whose website is www.socaltrailheadz.org