The day had finally come where we were going to unvail our latest Running Brothers Movie. Lacey had devoted a lot of time and effort to editing our film and we were eagerly awaiting the outcome. The whole Running Brothers clan was there along with close family and friends, including many of our heroes.

The movie began and laughs immediately ensued. Our fans erupted in laughter again and again out the outlandishness of our latest Running Brothers Movie. When all was said and done we gathered around and dissected the meaning of the film along with our favorite parts.

Each person seemed to find something they liked differently about our movie. My favorite part was invisible duck hunting.

What was your favorite part? Comment below and let us know.

The world premier for our Third Running Brothers Movie is set for September 24 at 10 PM PST.

Without a doubt, this third film, is The Running Brother’s finest.

Here is a Sneak Peek . . . a little taste of what you can expect when the movie premiers on www.RunningBrothers.com – http://runningbrothers.com/1541/a-sneak-peek-of-the-new-running-brothers-movie-with-invisible-shoes/

We recently completed the filming of our Third Running Brothers Movie.  In the movie we will be featuring the Invisible Shoe.  Somehow, the makers of the Invisible Shoe found us online and sent us a pair of shoes to try out.

We previously posted an article about Huaraches, which is essentially the same thing as the Invisible Shoe.

If you enjoyed our first two-part Running Brothers Movie, this one blows that one out of the water.  I don’t want to give away our movie, but all I can say is . . . you will never laugh harder.

If you’re interested in barefoot running and want to check out Invisible Shoes go here: InvisibleShoe.com“

If you’re interested in trying out Invisible Shoes yourself, or if you want more information about them go to InvisibleShoes.com

Many of you may not know this, but I was working for a photographer running film back and forth from the rafters at the Anaheim Ducks games during the playoffs.  The work was not difficult, I simply had to go into the rafters of the Honda Center in between periods and change out the sim cards for the camera’s that were positioned at the top of the building.  Prior to the game, I was asked by the photographer of the Ducks to assist in the photographing of David Archuleta who was singing the National Anthem that night.  I was introduced by the photographer and shook his hand a couple of times.

He seemed like a really nice guy and was smiling constantly displaying his upbeat attitude.  I posted on my Facebook page that I was “hanging out” with David Archuleta and got a plethora of responses and jokingly, I said that he wanted to audition in the next Running Brothers Movie.  I got a good laugh out of that comment and decided to post it to my Twitter page.  The next thing I knew I was getting David Archuleta fans telling me how happy they were that he was going to be in our movie and watching our movie and making comments about it.  Although I had no idea that my Twitter post would lead to that reaction it was kind of cool.  We even had several of his fan sites pick up the story and run with it, saying things like, “David Archuleta to be in the next Running Brothers Movie.”  It was very cool, but I do want to clarify that I didn’t mean to be deceptive, I just thought it was a funny joke for my followers.

Anyways, it was a lot of fun getting people to check out our movie and very interesting to see how die-hard David Archuleta fans are.  One thing I can say for certain is that David Archuleta is a super cool dude and if he were interested in being in the next Running Brothers Movie we would love to have him. 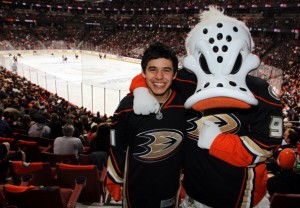 This was the picture that I helped to take of David Archuleta at the Anaheim Ducks game.

Thank you for watching The Running Brothers Movie.  We hope you like the outcome.  If you haven’t seen Part #1,  you can click here to watch it – http://runningbrothers.com/982/the-running-brothers-movie-part-1/.  If you like our movie(s), please be sure to share them with your friends and post them to your Facebook pages.  The most fun we get is hearing from people who we’ve never met before that tell us the movie was awesom, so don’t be shy, tell your friends.

Thank You From The Running Brothers!!!!

Thanks for checking out our movie.  We would love to hear what you think so be sure to comment on our page.  If you enjoyed the movie, share it.  And if you want to get to know more about us you can “like” us on facebook, The Running Brothers and follow us on twitter, @runningbros.

Part 2 of our movie will be online one week from today.  We really hope that you enjoy it as we had a lot of fun making it.

The Running Brothers: Part 1 will be released at 12:01 AM Friday morning.  We had to break the movie down into two parts because it was too long.  The movie, seen by a select few, has received high praise thus far.  Just listen to the rave reviews of our critics.

“That was a funny movie.” – Grandma

“I haven’t laughted that hard in a long time.” – Dusty

Be prepared for one of the greatest movie events of 2011 with the opening of The Running Brothers.  The movie will not be shown in theaters and will only be available to those who visit our website, www.TheRunningBrothers.com.  See you at one minute after midnight on Thursday.